Women of the Ocklawaha: Erika Ritter 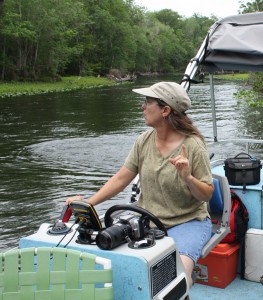 Erika Ritter leading a trip on the Ocklawaha River.

For a couple of months every three or four years, an excursion on the Ocklawaha River is a unique journey. The examples of evaluation essays water is closer to historic levels of the waterway prior to the construction of a dam. That’s when inland waterway captain Erika Ritter most enjoys taking passengers down the river.

The Rodman Reservoir near Palatka, Fla., was drawn down in December 2011 to remove invasive plants that clog the lake created by a dam. For a few months the Ocklawaha is about 11 feet above sea level—low enough to see the ecosystems, wildlife and shorelines that are usually buried beneath 20 feet of water.

At 11 feet, thought, the river is still five or six feet about its historical level on its journey for the confluence of the Silver River to the St.

buy lasix without a perscription

Johns River and finally to the ocean.

Ritter has lived on the Ocklawaha almost all her life. A fourth-generation Floridian, she started river tours on the Silver River in 1983. In 2006, she decided to return her business to her backyard: the Ocklawaha.

“I advertise real Florida,” she said. “People are accustomed to seeing rivers lined with boats, and docks and nice houses. They are really surprised—and thrilled—to find an area where humans have not touched every surface.”

She can fit about eight people on her pontoon boat, which has chairs with containers beneath for guests to keep their belongings dry. Ritter has maps and plenty of tales about the river’s history, including one about the failed Cross-Florida Barge Canal, a project so unfathomable and complex that an entire book, Ditch of Dreams, was written about the event that spanned more than 40 years and cost $75 million.

Ritter begins the tour telling passengers how to pronounce the river’s name. There’s no “a” after the “o;” so it’s not “oak-lawaha.” The sound is more like the “oc” in octave, she explains.

Her family lived on the river when the canal was constructed, relics of which include the Buckman Lock, the Rodman Reservoir, and a few very high bridges in the middle of nowhere.

She offers visitors her view of the continuing battle between some bass-fishing enthusiasts, the Florida legislature and environmentalists over the status of the Rodman Reservoir dam that keeps the Ocklawaha from its natural flow.

Most of Ritter’s narrative, though, is about the river and its natural history. She tells passengers about the manatees, the catfish and the natural ecosystems. She points out a small bird, stark yellow perched on a drab grey fallen tree.

“That’s a prothonotary warbler,” she says slowing down the boat, so passengers can get a better view.

Soon she stops the boat completely to get a better view of a huge lone catfish. Channel catfish and 16 other species of fish have been excluded from the river because of the dam and the Buckman Lock. The lock was designed to lift boats from the level of the St. Johns River to the level of the Rodman Reservoir.

As the pontoon boat putters past old pilings of a steamboat landing, Ritter points to her old family homestead.

“This used to be a nice peaceful area, but now it is full of exotic plants and airboats,” Ritter says.

Paul Nosca, also known as “Ocklawahaman,” joins in the narrative. “And there used to be fish camps all up and down the river,” he says.

Not long into the excursion, an airboat speeds by from around a bend. The driver looks frustrated as he tries to get around the slow moving craft piloted by Ritter. Rather than slowing, he revs his engine and glides past, forcing frothy wake toward the pontoon boat and against the fragile ecology at the river’s edge.

“They don’t care or they don’t know,” Ritter says. “They’re loud and not plant friendly. The airboats have a tremendous impact on the on vegetation and they are hurting the small end of the food chain.”

Ritter points out more sites as the boat moves slowly down the river.

“That’s where the crusher-crawler came through,” she says.

This piece of heavy equipment was a technological wonder in the 1960s that could flatten hundreds of trees in short order, Ritter recalls. And flatten it did. Hundreds of thousands of trees fell under its maw in the effort to construct a canal across the center of Florida so boats could move from the Atlantic Ocean to the Gulf of Mexico, according to Steven Noll and David Tegeder in their book, Ditch of Dreams

She was about 10-years-old when she overheard adults talk about the impact of the dam and the canal. She recalls her own fears, especially that her favorite places to play would be usurped by the barge canal. She was afraid her world would be crushed too, she recalls.

“I used to walk down to this beautiful creek. There were all the things that you could get to as a child—right at the edge of the water. Like the grass and shallows. You could play with the little minnows and stuff,” she says.

Once the canals were dug and the trees and vegetation gone, invasive plants took hold, and contractors and government agencies came to remove them with chemicals. One day, she remembers, her mother was directly sprayed.

“Most people did not want the barge canal. But the politicians thought it would increase the economy. Big boats could cross Florida using the locks,” Ritter recalls.

The lifelong efforts of Marjorie Harris Carr and others finally convinced politicians that there was more money in fishing and tourism,” Ritter tells the passengers as her boat floats past degraded woodlands.

The Cross-Florida Barge Canal was officially suspended in January 1971 by executive order of President Richard Nixon.

The river banks stay flooded with water for years at a time and the river current slows.

The natural Ocklawaha had a rapid flow. Water from Silver River, near Ocala, could reach the St. Johns River in three days. The rapid flow kept the sandy bottom clean, Ritter says.

When the dam is closed the water travels significantly slower, taking up to 23 days to reach the St. Johns. Without the strong flow, algae get out of control.

As the boat glides near a shoreline, Nosca points to the banks. “They used to be white sand with easy access to the river, once you were out of the woods,” he says.

The banks he points, though, are thick groves of declining cypress trees and stumps, sagging oaks, and tangled possum haw–nearly impenetrable. Muck and detritus cover the shoreline.

“This is one of the oldest rivers in Florida,” Nosca tells passengers, recounting its geologic history through the central ridge—the area of Florida’s highlands that have persevered over millions of years of sea level rise and decline on the Florida peninsula.

Ritter maneuvers the boat gently against a bank and Nosca helps passengers disembark for a short excursion into woods that are usually under water.

A few mosquitoes buzz around as passengers carefully make their way through branches and knotted roots, until they come to what appears to be a wood wall. Nosca waits for the awe to sink in. It’s a cypress tree as large as a cabin and stretching what seems to stretch 100 feet into the air.

The tree is completely hollow. Standing inside the cavern of its wide base, it is possible to see the sky. Shafts of light pour through several slashes in the trunk. A bit of wispy green fringe struggles from the top against the sunlit blue background.

As the group makes its way back to the boat, Nosca points out the trees progeny. Tiny cypress barely inches high sneak up from the leaf and humus on the ground.

“They’ll be drowned in a few weeks,” he says, a noticeable sadness in his voice.

Although cypress trees grow well in swamps and wetlands, the four-year period of high water when the Rodman Dam is closed is too much for their normal life cycles. The trees typically reproduce from seeds more readily than from suckers.

The seedlings have no chance for survival. They die soon after the water rises over the banks. The suckers are just as threatened; they cluster tightly at the base of the mother tree, as if clinging to hopes of surviving another flood.

When the reservoir is full, the cypress also struggle for oxygen in the depleted and nearly stagnant high water. The trees frantically send up knees, desperate for a breath.

Cypress knees are typically spaced a foot or more from each other, but in the Ocklawaha they are glued together in grotesque malformations, resembling abstract rather than nature.

Tree after tree along both banks of the river look identical—high water mark noted by a ghostly shadow of mineral scale. Overhead are sparse patches of pale green needles fluttering in a breeze. Absent is the thick lush spring growth that healthy cypress would sprout this time of year, Ritter says.

“Because of the constant water, we’re losing the diversity of trees, too,” Nosca says scanning the bank and pointing to a few flowering haws.

When flooded, the river-channel ecosystem loses 14,000 acres of land that was used by ground-nesting birds and other wildlife along the banks.

Future of the River

The situation is controversial. Some government agencies have recommended restoring the Ocklawaha River to its natural state and establishing it as an official “Wild and Scenic River,” according to Florida Defenders of the Environment. Others believe the fishing in Rodman Reservoir and the economic benefits are more important.

Ritter says she wants to see the river the way she remembers it from childhood.

In the meantime, she hopes that people will have an appreciation of the river and see that it is a special place—a sanctuary to learn about nature.

“And when they go back to town, they will realize that there is a place they can come back to. A quiet place where humans have not totally taken over and changed the habitat and run off the wildlife,” Ritter says as she slides the boat back to the dock marking the end of the idyllic journey down the Ocklawaha.