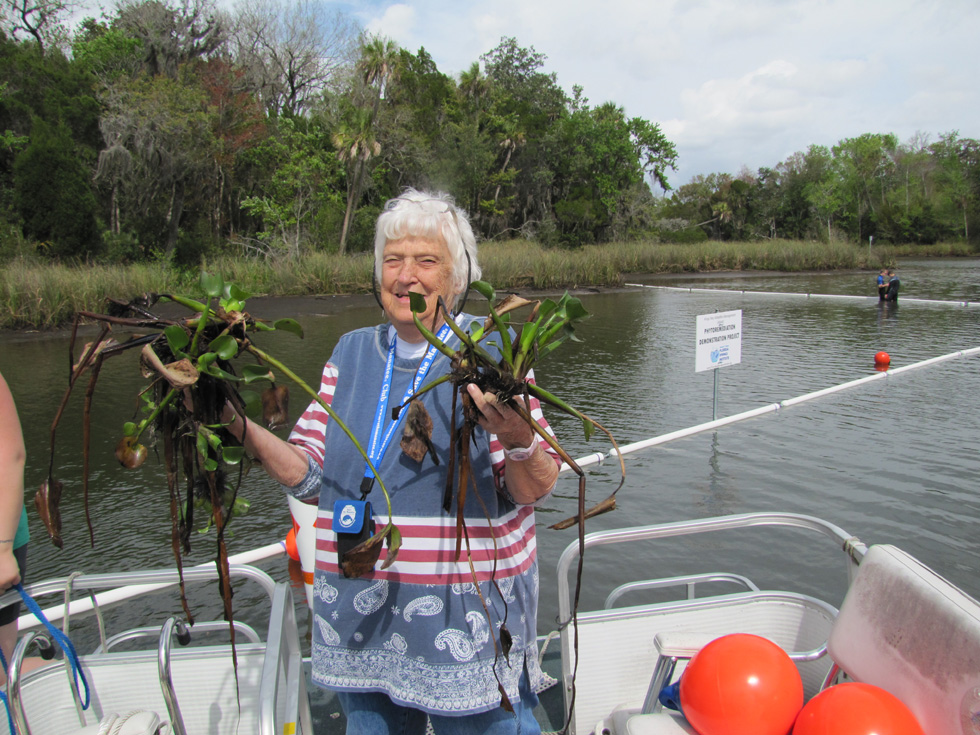 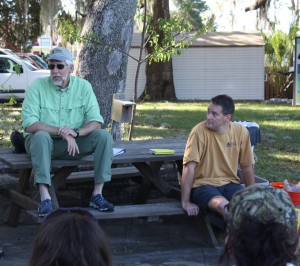 In March 2012, Bob Knight embarked on what some believe is a dangerous experiment. He reintroduced water hyacinth into Kings Bay in Crystal River, Florida, at the Crystal River National Wildlife Refuge. The bay is a haven for manatees, which unlike Floridians happen to love hyacinth.

Since it was first brought to the St. Johns River in 1890, water hyacinth has choked waterways, impeding boat traffic and, according to some biologists, altering ecosystems. Complex and unusual mechanical controls began in the early 1900s, followed by chemical controls in the mid-20th century. Finally in 1972 a biological control, the mottled hyacinth weevil, was developed and released by the U.S. Department of Agriculture.

Regardless of its notorious past, Eichornia crassipes, is a superstar at taking up nutrients, particularly nitrates that encourage explosive algal blooms, primarily Lyngbya species, in Florida fresh water bodies. Much of Kings Bay is dominated by these filamentous blue-green algae, which turns the water cloudy and greenish-brown, Knight told a group of students gathered to assist in the project.

Swimmers in Florida springs and bays are often put off by the slimy-cottony floating masses that can cause skin irritations and asthma-like allergies. Lyngbya may also produce secondary chemicals that act as feeding deterrents to fish, crabs, and other animals.

Thirteen students traveled from Waynesburg University in Pennsylvania to spend their spring break learning about aquatic ecosystems and to participate in the Kings Bay Adaptive Management Phytoremediation Demonstration Project organized by the Howard T. Odum Florida Springs Institute. The visiting science students spent their days taking water quality and quantity samples and listening to lectures by Knight, wetlands and aquatic ecosystem expert and director of the Institute.

Led by Chad Sethman, Ph.D., assistant professor of biology at Waynesburg University, the students also participated in building the floating corrals necessary to hold in the hyacinth for the experiment and raking and harvesting algae—a labor-intensive mechanical control to keep the bay bottom clean. And when there was time, the students swam with the manatees that take refuge in Florida’s warmer inland waters and springs during the winter months.

Knight explained to students that although hyacinth has been considered an invasive plant in Florida, it was chosen for the experiment because of its unique qualities.

Knight is not alone in his belief that water hyacinth may hold the key to reducing algae populations and removing nutrients from Florida’s springs and bays. The theory behind the experiment is valid, according to Mark Brown, systems ecologist in Environmental Engineering Sciences and Matt Cohen, hydrologist and assistant professor in the School of Forest Resources and Conservation, both at the University of Florida (UF).

“Hyacinth is very good at removing nutrients,” Brown said, although he doubts that this one action will restore Kings Bay to its previous environmental health. The bay has suffered under decades of chemical controls as well as impact from development, run-off, reduced spring flow, and recreational use.

Knight is confident in the potential for hyacinth to improve water clarity in the bay. “People have been successful at engineering water treatment systems using hyacinth—to propagate them in ponds to treat waste water,” he said.

But Walter Judd, botany professor at UF, urged caution and questioned the prudence of using a non-native plant known to be invasive in Florida waters. Judd suggested alternatives for Kings Bay remediation such as less invasive non-natives: frog’s bit (Limnobium spongia) or water lettuce (Pistia straiotes). These he said would cover the water surface, may take up the same nutrients, and may be inviting to manatees as well.

Robert Lovestrand, regional biologist with the Florida Fish and Wildlife Conservation Commission (FWC) said the phytoremediation demonstration was agreed upon by all the parties participating: the U.S. Fish and Wildlife Service, FWC, and other agencies involved in the permitting.

Yet he worries about the potential downsides. He is concerned that the hyacinth may lodge in out of the way canals or boat slips. And he is not sure that the biological control is up to the job of mitigating a widespread growth of hyacinth outside the experimental area.

“This is an experiment. There are a lot of things that can go wrong with it,” Knight said. He also points out that hyacinth is now part of the Florida ecosystem, and Floridians might do well to learn to accept its good qualities as a provider of free ecosystem services.

Lovestrand said that while the fish and wildlife commission is “onboard” with the experiment, they are ever watchful of the hyacinth. “We have a long history of managing hyacinth in Florida,” he said. “It’s what we do.”

Lovestrand added that fish and wildlife is “all for getting questions answered,” especially if it ultimately means beneficial outcomes for remediation of the bay.

The students have returned to Pennsylvania, Knight and the KBAM research team continue to monitor the hyacinths. “We hope gather enough data to show water quality improvement so that we can extrapolate to a larger project,” Knight said.

In the meantime 565 manatees are competing for the floating snacks in King’s Bay, which Knight said they discovered within hours of placement. Lovestrand noted during the past few weeks that the manatees have helped themselves to the hyacinth about as fast the researchers can get the plants in the corrals.

“We’ve put a little salad bar out there for them,” Knight said.

Watch the slide show of the students at work in Kings Bay. 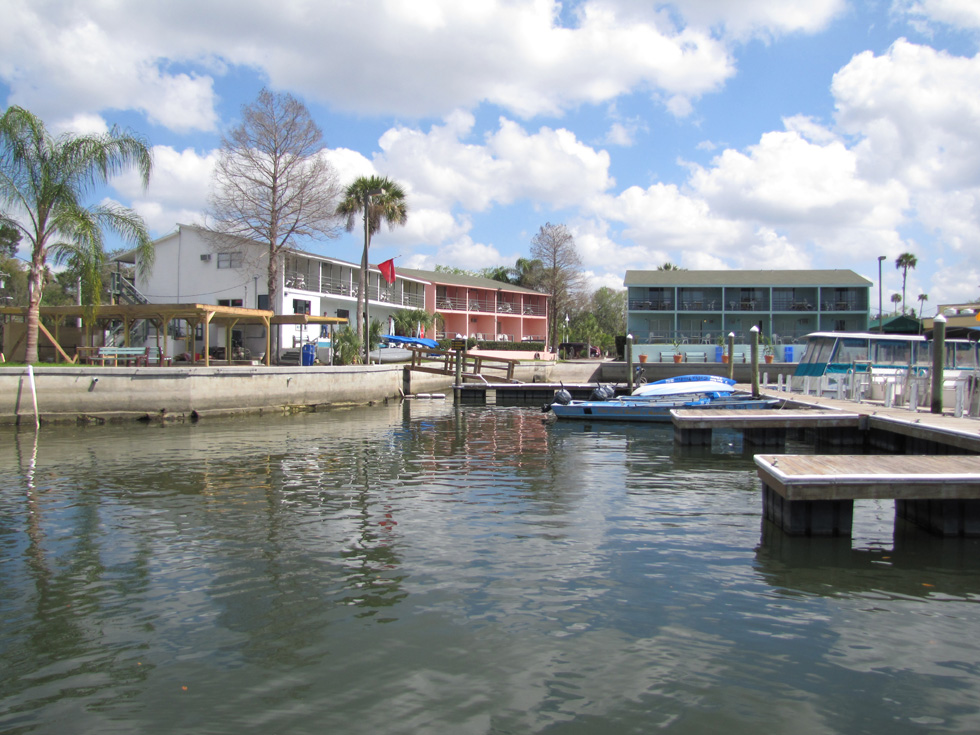 King’s Bay in Crystal River, Fla., has been a troubled and degraded aquatic ecosystem for decades according to residents, conservation agencies, and Bob Knight, director of the Howard T. Odum Florida Springs Institute. Knight conceived of a remediation project, that some call controversial because it employs a once invasive plant, water hyacinth. 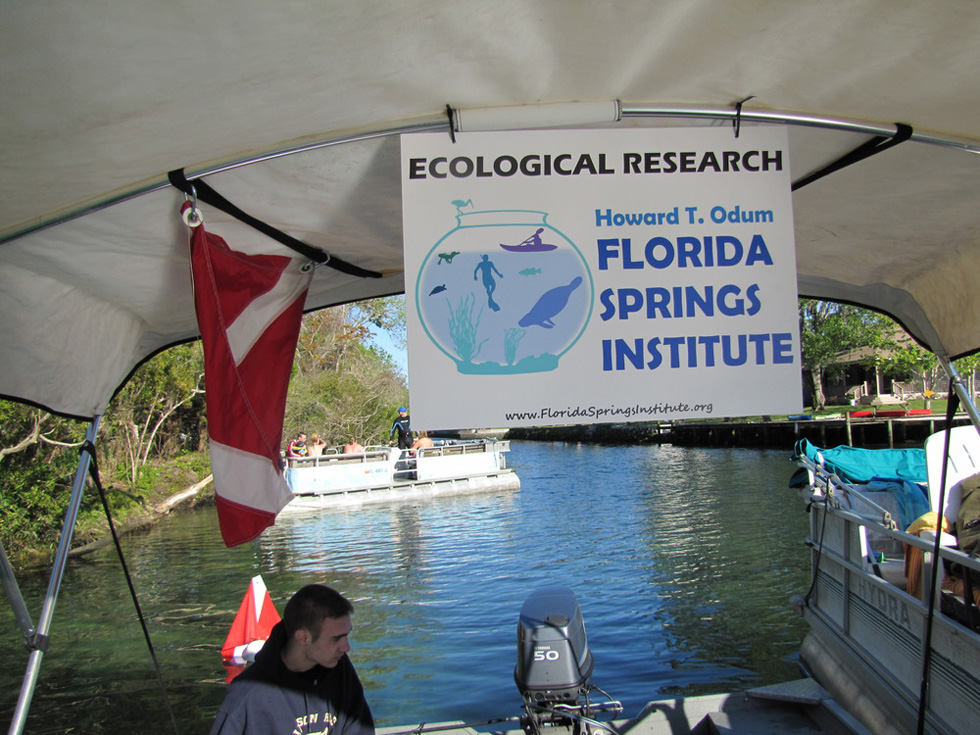 During their spring break in early March, students from Waynesburg University in Waynesburg, PA, embarked on a week-long phytoremediation demonstration project at Kings Bay to install hyacinth—which is currently controlled through introduced biological controls.

The project included putting together corrals to hold the hyacinth that would placed in the bay to uptake the nutrients, which Knight says are partly responsible for the overgrowth of algae in the system.

Students were divided into several groups, each with separate tasks. One group assembled the corrals to contain the phytoremediation project in a part of King’s Bay. Left side of table left to right: John Allison, Rachel Sethman, Samantha Swab, Chad Sethman Right side of table, foreground: Brooke Kappert. Background: Nathan Hamilton.

While others went out into the bay to take measurements of water chemistry, flow, and clarity. A third group (background) measured off the location for the corral that would be buffered against the shore of an island in the bay.

Later during the week, Jeffery Johns (left) and Nathan Hamilton bgean assembly the corral in the bay.

Helen Spivey, long-time champion for Save the Manatee Club and for Kings Bay restoration holds hyacinths ready to be placed in the completed corral at King’s Bay in Crystal River, Fla.

Waynesburg students enjoy a much deserved trip to nearby Three Sisters Spring to swim with the manatees.

A dozen or more manatee swam with visitors at Three Sisters Springs in the Crystal River National Refuge, Crystal River, Fla. Manatees are gregarious and enjoy congregating with each other as well as people, but park rangers request that people not touch the manatee. 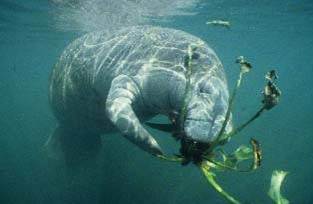 A manatee, not one in Kings Bay, demonstrates that this aquatic species enjoys munching water hyacinth wherever available.

2 thoughts on “Return of the Hyacinth”