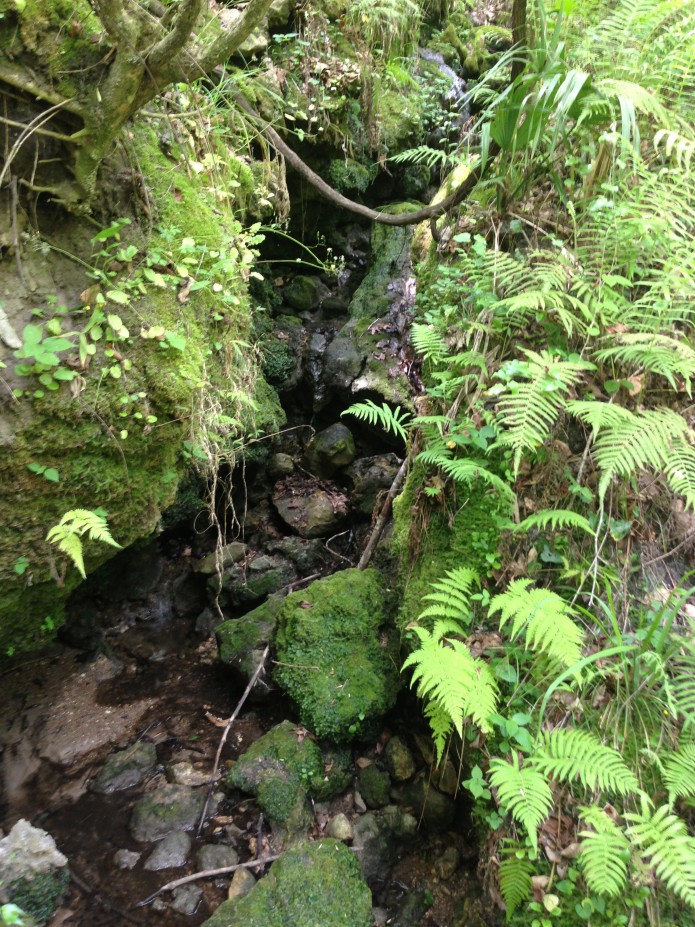 Into the Devil’s Sink

As the legend goes, the devil fell in love with a local Indian woman and opened up a hole in the earth to take her down with him to hell—giving birth to a sunken rain forest.

Called the Devil’s Millhopper for its shape, like that of a mill’s hopper, the sinkhole in northwest Gainesville has carved itself into the bowels of the Earth over the last 15,000 years. Once, millions of bones—fossils of early horses from younger layers of rock and sharks teeth from older layers when Florida was seafloor—covered the bottom of the ancient pit, before paleontologists and pilferers combed the area.

My descent down the 220 stairs into the devil’s bowels begins at noon. I pass a pignut hickory (Carya glabra), its bark marked by pronounced lines like engorged veins. I lift my sunglasses to get a closer look. The myth comes to my mind. People say they hear her screams at night. A shiver runs down my neck and I hear a possum move in the palmettos. The leaf of a bluff oak falls in my path. I pick it up. It crumbles in my hand.

Mosses and liverworts grow on the coquina rock that walls the cavity. Rain and spring waters, flowing along the limestone layers for millennia, have softened the rock wall. Stiff dogwood and red mulberry grow at precarious 45 degree angles around me. A force pulls the trees downward, testing their structural limits. Roots are exposed.

Not so long ago, the forest around the millhopper burned naturally. Even now, charred trees—blackened and hollow—reveal past lighting strikes. But humans do not allow nature to run its course here anymore. Species suffocate beneath the overgrowth. Park rangers protect what’s left with signs that read, “Stay on the trail.” These remaining species have adapted, and many even flourish. Ferns grow here by the hundreds among the wet rocks and jungle-like flora. The same moisture that feeds the swamp bay and sea myrtle creates a dampness that sticks to my face. Recent rainfall carried by gravity forms dozens of small waterfalls along the slope. Like the spin of a potter’s wheel, their flow slowly shaped the sinkhole over millennia.

I stop to tie the shoelaces of my gray high-tops. The pressure treated board where I stand creaks. While human engineered, this staircase is no match for water, which eats away at the posts holding up the walkway, its tourists and its nature lovers, as it simultaneously cuts through rock and earth. Always digging deeper. Some of the boards feel like they might give way beneath me as I follow them down. New boards mark locations where white ash or live oak have tumbled, destroying chunks of the stairs. Is nature up to something sinister, I wonder. Does the millhopper yearn for its balanced origins?

I reach the bottom.

Inferior inscriptions meant to reflect the beauty and meaning of this place are scribbled in sharpie or carved into the wooden overlook. Someone writes, “Not all who wander are lost.” A family poses for a photo in front of a rusty blackhaw tree.

Water falls down the rocks, dynamic and clear; Mother Nature running a bath. It settles into the greenish blue center—a contrastingly stagnate pool glazed over like the eyes of the dead. At the edge tiny minnows by the hundreds gather, all sporadic, yet seemingly choreographed, and now darting off with a slight disturbance of the shallow, murky water. A dark shadow, they head straight for the blue-green eye, dancing against the current with their collective strength.