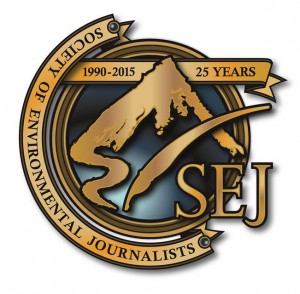 On Valentine’s Day in 1990, a small group of reporters, editors and producers covering the environment for The Philadelphia Inquirer, USA Today, Turner Broadcasting, Minnesota Public Radio, and National Geo launched a professional organization dedicated to the challenges of reporting on complex environmental issues.

Twenty-five years later, the Society of Environmental Journalists has a membership of more than 1,400 reporters and academics working in every type of news in the United States, Canada, Mexico and 27 other countries. We’re a supportive network dedicated to fair, independent, accurate and engaging coverage of environmental issues local to global. On our vigorous list-serv, members can ask anything from where to find agricultural subsidies to how to craft a book proposal. We also offer mentoring; grants to environmental reporting projects that need funding; annual awards; and training that includes regional meet-ups and a wonderful annual conference.

If you’re thinking about environmental reporting as a specialization, check out our special student membership rates and join like-minded journalists working to cover the biggest story on the planet.

In 1661, an English diarist named John Evelyn wrote a missive to the King outlining remedies for London’s choking, dirty air: “The immoderate use of, and indulgence to, sea-coale in the city of London exposes it to one of the fowlest inconveniences and reproaches that can possibly befall so noble and otherwise incomparable City,” he wrote. The complaints were familiar two hundred years later when Charles Dickens described London air pollution so severe the skies rained black and snowed soot. It would take a century more, only after thousands of people died in the Great London Fog of 1952, for Parliament to pass a Clean Air Act.

UF’s new Environmental Journalism class opened with Evelyn and Dickens today to underscore the point that the field is by no means new. American writers like John B. Oakes famously called attention to the problems of the environment in the early twentieth century, as did Floridians such as Marjory Stoneman Douglas. It was heartening that so many students knew Douglas and her 1947 book of the Everglades, River of Grass; they didn’t realize she was a journalist first, reporting for the Miami Herald from 1915 to 1923.

Environmental Journalism isn’t really new at UF’s College of Journalism and Communications, either; some of our best-known EJ alumni include Robert McClure, co-founder and executive director of Investigate West and Florida environmental reporter Bruce Ritchie, who founded the news site Florida Environments and is now at work on a book about the Florida-Georgia-Alabama water wars. Beloved Florida nature photographers John Moran (BS JM, 1978) and Carlton Ward Jr. (MS Ecology, 2007, with photojournalism professor John Kaplan as major advisor) also came through the college.

Interest in EJ seems to sway with the intensity of environmental perils facing society. Air and water pollution severe enough to set rivers aflame mid-20th Century drew groundbreaking reporting on pollution that in turn helped spur creation of EPA and the Clean Water Act, along with Florida’s water and land protections of 1972. Today, as human activities have ever-more serious impacts on our local regions and the planet, we likewise see renewed interest in EJ. Journalism and communications students say they want to help people understand complex issues like climate change; many science students are seeking to engage the public more directly in their research. In class today, an evenly divided number of journalism and science students learned they had much in common – especially their ideas for under-reported environmental stories, deserving to be told. We hope to share many of those stories here, building on the work of UF journalism professor Matt Sheehan and his students who created this site as part of their water-reporting course in 2012. You can also follow our progress on Twitter with the hashtag #EJUF.

We can only hope that given the speed at which news travels compared with Evelyn’s and Dickens’s day, we won’t have to wait 300 years for society to tackle the environmental challenges of our times.